Short for “as would be the case if,” it is a display of disbelief and suspicion, sometimes even disgust, similar to “Yeah, right!” Occasionally, “As if” can be a synonym for make-believe or a simulacra.

Impressive technological fabrications have become commonplace; as if they are a natural extension of the world. Perhaps, more than ever, we are acutely aware of how technology is evolving and the way it is transforming the world—even without considering visual culture. Technology is usually defined by the most up to date examples; however since the beginning, humans have been creating tools to adapt and survive. We can use this broader definition for the technological.

Medium has already become the message. Nevertheless, in the rapidly developing digital realm, the fact that invisible algorithmic operations along with alphanumeric codes underpin the message makes the evaluation of the medium rather difficult. This invisible force within new media puts technologically reliant art into question—especially when technology is the artistic medium, artists often struggle to consider their own agency in the face of a device or a technique that is highly advanced.

Unwilling to join the pragmatists and the cynics, some of us balk in the face of unknown consequences technology might bring but do not take back the hands already stretched out. The exhibition As If throws itself into the culture redirected by the continuous technological renovations which permeate our lives, and suggests a gesture of camouflage—disguising itself as an array of works which seem incidental or commonplace. The artists in the show register their perceptions in the technological landscape, and each inquires into or casts suspicion on our attachments to and engagements with technology—its materials, artistries, procedures, languages, and forms. The shared strategy here is one of the “as if”—the artists presume, posture, twiddle, and redact. They consider technology as a subject matter to be examined as well as a medium to be utilized in performative gestures. The objects range from computer codes in Petro Zylbersztajn’s ORDERANDEXECUTION (Score for Two Readers) (2018) and Emilio Vavarella’s Sicilian Family (2012-2013), to the mechanism of a computer screen exposed by Simona Fitcal’s I.M.U.R. (2015). These materials, infiltrated by prescribed information, are suspended in the artworks and invite constant scrutiny.

The hands-on relationship to technological materials, such as a defect captured by a microscope on a silicon chip in Angel Chen’s I Saw It, I Lost It, Then I Went Looking for It (2017), might offer us another understanding of our impulse to handle technologies: even if it is a desire to chase something unfathomable in essence. This ambiguous attitude the artists hold towards technology drive them to tap into the social and cultural environments surrounding them with a potential to demystify the subject matter by way of manipulating or embodying it. For instance, the series Undulations (2018) by Christopher Squier uses patterns of light as an example to explore the intersections between art history, applied physics, and sociology. While learning or mimicking the technical principles and aesthetics, the artists attempt to remain introspective without losing their role as agents, notwithstanding the temptation to turn over the agency to the technological material itself.

Cohabiting with a cafe, a non-specific and non-immersive site, this exhibition also asserts a viewing experience from the mundane. First Person Leaky (2014) by Rosa Aiello speaks to this transformed space in an animated language by navigating us through an interior environment with the virtual space embedded within. What's presented and how it is presented in the show appears to be unreasonable or at least not satisfying enough deliberately in the media art genre. Bringing us to the post-industrial era when the current scene originated, Nancy Buchana’s Tech-Knowledge (1984) points out the question of what technology is. In turn, Jen Liu’s Machinist’s Lament (2014) proposes a future in which industrial production has been successfully brought back. Although in Damon Zucconi’s Presents Itself as the Problem (2009), the floating “I Want To Believe” on top of an obsolete persistence of vision clock is ironic enough as an evidence of the erratic nature of technology, it still holds a message of hope, wavering and waiting. 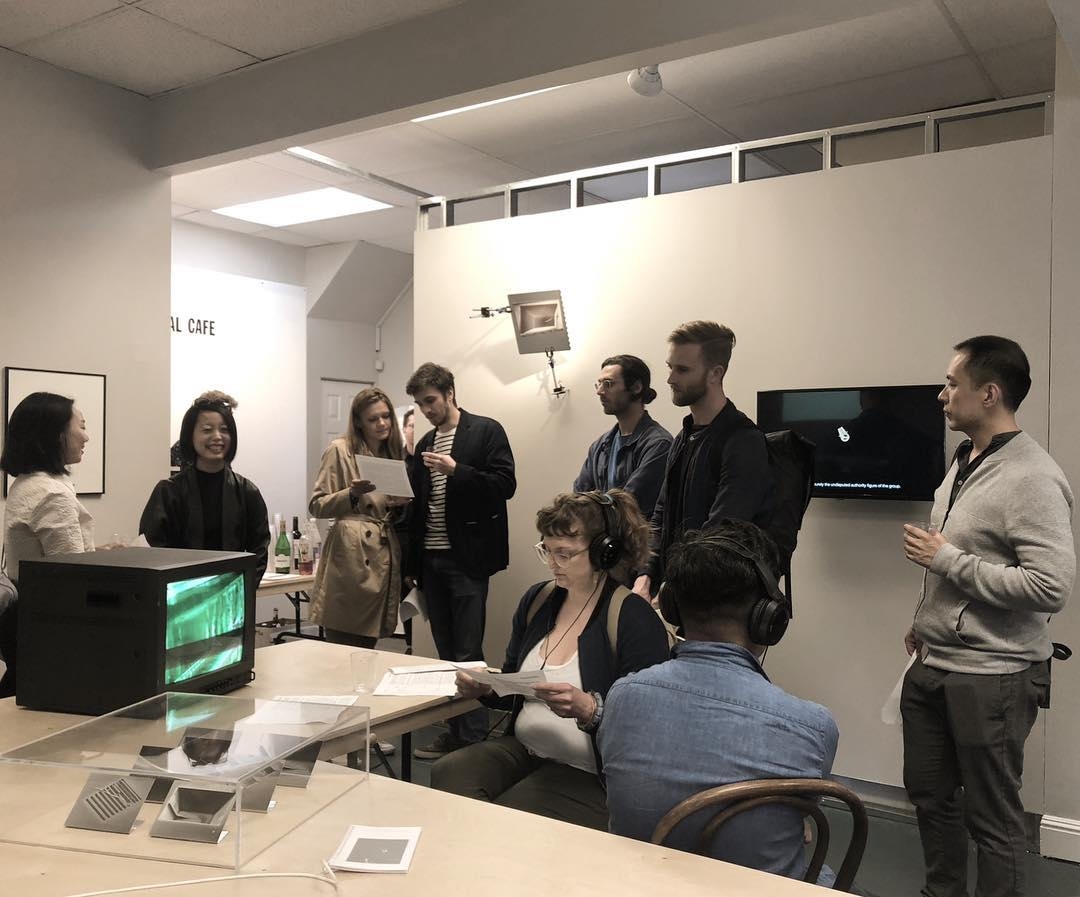